Hackmann electrifies on such signature numbers as “This Is the Moment” and on the climactic “Confrontation” in which his duality is brilliantly conveyed through a translucent scrim behind which Jekyll struggles to escape Hyde’s enveloping hold on his life.

Hackmann just soars in this production as the story unfolds, lending a believable and emotional depth to the character, as he portrays a man coming apart at the seams due to his own experimentation and his wish to play God.

Nathaniel Hackmann gives an incredible performance as Henry Jekyll/Mr. Hyde. With clearly defined characteristics, mannerisms and tone, the seeming ease with which he portrays the duality of his character is stunning. His strong and clear voice rings with emotion and soars through the theater with every number, particularly in the iconic “This Is the Moment, and Hyde’s “Alive!”.

Accordingly, we may focus on Mr. Hackman’s considerable skills that made his performance the magical tour de force it became: It goes without saying that this play requires deep insight into the nature good and evil … particularly as they occupy the body of a single individual simultaneously (this, after all, is the plot in a nutshell). In that regard, Nathaniel Hackman immediately makes gasping believers of his audience despite the improbable nature of the proposition.

Paint Your Wagon (City Center Encores)
“It’s perhaps a measure of Lerner’s diffuse book that the show’s most famous song They Call the Wind Maria is performed by a supporting character, a miner named Steve who barely stands out from the pack, at least until Nathaniel Hackmann opens his mouth to sing this ode to the lonesome West. Mr. Hackmann makes the most of his solo in the spotlight, his handsome baritone soaring over the orchestra.”(New York Times)

Sweeney Todd (Opera Theatre St. Louis)
“Arguably, the star vocal honors belonged to Nathaniel Hackmann’s superbly sung Anthony. The rich and ringing tone he brought to his paean to Joannah, the impassioned youthful spirits, the beautiful control on the hushed declarations of love, Mr. Hackmann regaled us with ravishing vocalism of the top tier. Add to the mix the fact that he is boyishly appealing, and you have, well, a definitive performance of the plucky lad.” (OPERA TODAY)

“OTSL’s stunning production of Stephen Sondheim’s “Sweeney Todd” had the best of both opera and Broadway worlds: This tight show was one of OTSL’s best ever. OTSL fielded a carnival of talent: lyrical Nathaniel Hackmann as the sailor Anthony; Scott Ramsay, a smarmy Beadle Bamford; Anthony Webb, high-flying as Pirelli; and Kyle Erdos-Knapp, an enchanting Tobias.” (WALL STREET JOURNAL)

“The best thing I heard during the OTSL season was “Sweeney Todd.” If there were any justice in the theater world, Ron Daniels’ brilliant, tightly paced production would go straight to Broadway and run forever. Of course, few houses on the Great White Way could afford the luxury of conductor Stephen Lord’s orchestra or the flawless cast of gifted singing actors OTSL assembled.” (CHICAGO TRIBUNE)

“It would be difficult to imagine a better production of “Sweeney Todd” than the one that the Opera Theatre of St. Louis. An exceptional cast, evocative scenery, top-notch musicians and conductor, expert lighting and costumes – you name it – it was all present and razor sharp at the Loretto-Hilton Center.
Thank goodness for the bright, warm, and hopeful portrayals of the young lovers by Hackmann and Briewick. Without them, “Sweeney Todd” would just be all blood-sausage with no mustard or beer to wash it down.
All in all, this production of “Sweeney Todd” was of the highest caliber, and the audience rewarded it with a thunderous standing ovation.” (OREGON MUSIC NEWS)

BEAUTY AND THE BEAST (National Tour)
“(With) a magnificent vocal range (Hackmann) essays the strenuous physical role with towering strength… (As) Gaston, the comically cartoonish bully who proves the real beast of the evening, his comedic moves are just delightful.” (LOSANGELES.BROADWAYWORLD.COM)

“Nathaniel Hackmann unleashes his lush, rippling baritone singing voice with precision as Gaston. There are even a couple of moments on held high notes that hint at a portion of his voice left untapped in this role. He possesses the right attitude and swagger as Gaston.. He is the perfect straight man in his physical comedy.” (TALKIN’ BROADWAY)

“As for the cast, the show’s blatant standout is definitely Hackmann, as the pompous exhibitionist Gaston, who effortlessly steals the show with each appearance. His character’s over-the-top braggart personality is supposed to be the story’s “villain,” yet amongst the cast, he exudes the most playfulness and commitment, often leaving the audience in stitches.” (COSTAMESA.BROADWAYWORLD.COM)

“Nathaniel Hackmann is a standout. He plays Gaston with likable swagger. At full-on Bravado, he struts, flexes, and prunes as a harem swoons. He was the best performer on this opening night, and commanded attention with every smirk and guffaw.” (STARKINSIDER.COM)

“Nathaniel Hackmann (Gaston) is superb on all counts playing the bombastic and terminally conceited villain of the story — a strong voice, great stage presence, excellent timing and huge biceps are key elements in a memorable performance.” (STARADVERTISER.COM)

“Gaston, played with self-absorbed swagger by Nathaniel Hackmann. He’s a cut above the rest of the cast, obviously comfortable on stage with a voice as big as the Beast’s castle door.” (PALM BEACH DAILY NEWS)

“A mere 10 seconds or so into Hackmann’s first bit on stage … there’s all that fawning by “ga-ga for Gaston” groupies – but also Hackmann’s own very real charisma.” (PHOENIX NEW TIMES)

“We liked the rendition of Billy Bigelow’s Soliloquy from Rodger’s Carousel by Nathaniel Hackmann. Hackmann looks like he has no compunction being on stage in front of thousands of people, he exudes self-confidence and sang with the perfect amount of brash and cockiness.” (SFIST.COM)

“The Rodgers and Hammerstein songs in this production of Carousel could hardly have been better sung Nathaniel Hackmann (Billy Bigelow) is a star waiting to happen. “Soliloquy“ gets the reading it deserves by the tall, handsome Hackmann, as Billy speculates on becoming a father. Hackmann needs a hit record and a top publicist to put him on top. He wisely modifies his full-blown vocals just enough to display a rare, warm resonance when appropriate.” (CABARET SCENES)

“Leading the cast as the dashing cowpoke Curly is the stunningly talented Nathaniel Hackmann Hackmann’s voice and wealth of skill and talents deliver versions of the songs that will eradicate any preconceived notions you might have. Hackmann’s show-opening rendition of “Oh, What a Beautiful Morning” and “The Surrey With the Fringe On Top” are both beautifully nuanced, his impeccable phrasing capturing both songs’ sense of awe and wonder, making it seem as if it’s the first time you’ve heard either, while (his) “People Will Say We’re in Love” showcases the song’s lush melodies and Hammerstein’s clever lyrics to perfection. You cannot help but walk away from Oklahoma! falling a little bit in love with
Curly and the sweetly sentimental courtship played out onstage.” (NASHVILLE.BROADWAYWORLD.COM) 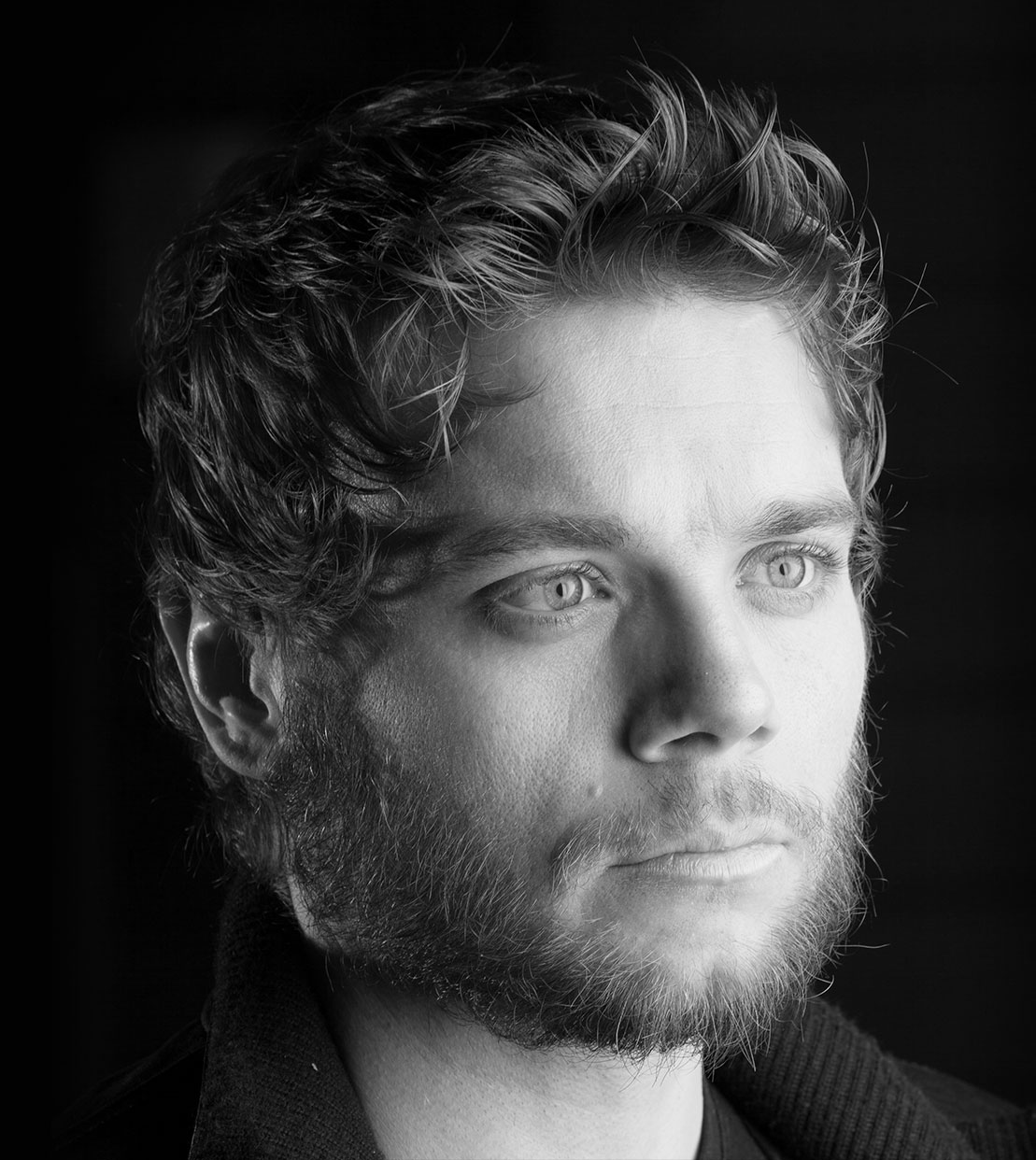